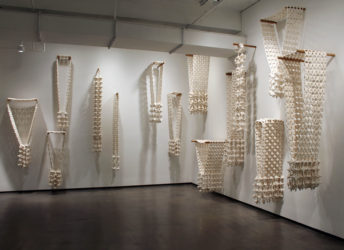 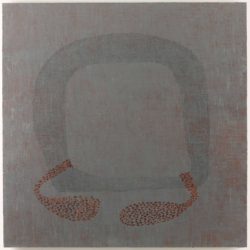 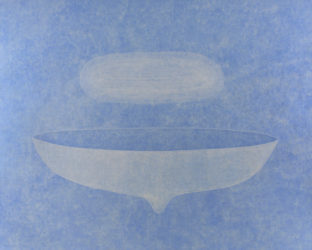 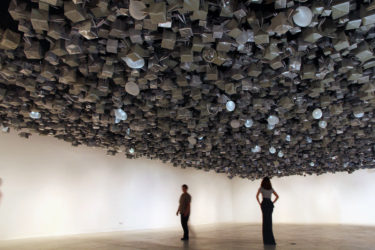 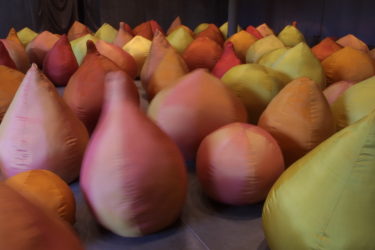 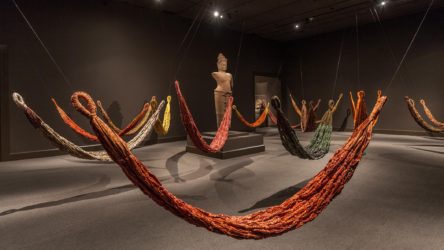 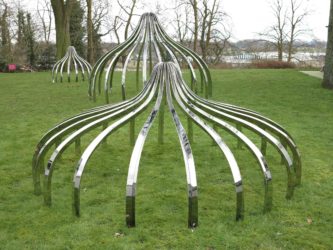 Pinaree Sanpitak is one of the most compelling and respected Thai artists of her generation, and her work can be counted among the most powerful explorations of women’s experience in all of Southeast Asia. Her primary inspiration has been the female body, distilled to its most basic forms and imbued with an ethereal spirituality. The quiet, Zen-like abstraction of her work owes something to her training in Japan and sets it somewhat apart from the colorful intensity of much Thai art. Her rigorous focus on the female form, explored through a variety of media – painting, drawing, sculpture, textiles, ceramics, performance, and culinary arts, to name but a few – has resulted in an astoundingly varied and innovative body of work. For the past twenty years, a central motif in her work has been the female breast, which she relates to imagery of the natural world and to the iconic forms of the Buddhist stupa (shrine) and offering bowl. Often called a feminist or Buddhist artist, she resists such easy categorizations, preferring to let her work speak to each viewer directly, to the heart and soul, with the most basic language of form, color, and texture. Her work is not lacking in a conceptual framework, but it is one informed primarily by a deeply felt spiritual sense rather than by rigid dogmas or ideological constructs.

Pinaree’s work has been featured in numerous museum exhibitions in Asia and Europe during the past twenty years, and she has participated in major biennials in Australia, Italy, Japan, and Korea. An overview of her work from 1995-2013 was showcased in a solo exhibition, Collection +: Pinaree Sanpitak, at the Sherman Contemporary Art Foundation in Sydney, Australia in 2014. In 2013, she presented Hanging by a Thread at the Los Angeles County Museum of Art, a solo exhibition featuring her large-scale installation of the same title, which was first shown at Tyler Rollins Fine Art in 2012 and subsequently acquired by LACMA. Another large-scale installation, Temporary Insanity, was exhibited in the artist’s solo exhibition at the Chrysler Museum in Norfolk, Virginia (2012) and subsequently at The Contemporary Austin in Austin Texas (2013). At the 18th Biennale of Sydney (2012) she showed a large-scale installation, Anything Can Break, at the Museum of Contemporary Art Australia. Subsequently on view at the Toledo Museum of Art in Toledo, Ohio (2014-15) and the Wuzhen International Contemporary Art Exhibition in China (2016), the installation comprises thousands of origami “flying cubes” and breast-shaped glass clouds suspended from the ceiling, with musical motifs triggered by motion sensors in response to the audience’s movements. Stainless steel sculptures from her Breast Stupa Topiary series were featured in the group exhibition, Female Power, at the Museum voor Moderne Kunst Arnhem, The Netherlands (2013) and are currently on view in front of ILHAM art gallery in Kuala Lumpur, Malaysia. Breast Stupa Topiaries were also part of her installation in the Setouchi Triennale in Honjima, Japan (2019).

Her 2015 exhibition at the gallery, Ma-lai, centered on a hanging fabric installation alongside a related series of paintings and sculptures, all taking inspiration from ma-lai floral garlands. The installation with its large-scale garlands that are at once delicate and monumental, evokes the female body, intimately linked to a sense of the enduring bonds of cultural traditions, family, and spirituality. The installation is now in the permanent collection of the Singapore Art Museum. Pinaree presented her fourth solo exhibition at Tyler Rollins Fine Art in 2017, which had two distinct but interrelated parts. The Vessels comprised the first overview of more than twenty years of her works on paper, culminating in a new series of drawings, In the Jars. Exhibited for the first time, the installation The Mats and The Pillows was conceived in conjunction with The Roof, a large-scale, hanging fabric installation, presented in 2017 and commissioned by Arts Brookfield.

Art in America, Exhibitions the Lookout

The New York Times, 10 Galleries to Visit Now in Chelsea

Untapped Cities, 12 Art Installations and Exhibits in NYC Not to Miss in April 2017

Artnet, 18 Public Art Shows to Get Excited About in NYC This Spring

The Blade, ‘Breast artist’ brings exhibit to the Toledo Museum of Art

The Straits Times, Art to smell and cuddle

The Phnom Penh Post, An artistic tale of two cities

Los Angeles Magazine, DO: ART: Look But Don’t Nap in These Hammocks

The Huffington Post, 2013 Art Preview: The 25 Most Anticipated Exhibitions Of The New Year

The Sydney Morning Herald, Best-ever Biennale as record audiences engage with the unexpected

Global Feminisms, Women Artists Then and Now: Painting, Sculpture, and the Image of the Self

Art in Southeast Asia 1997: Glimpses in the Future