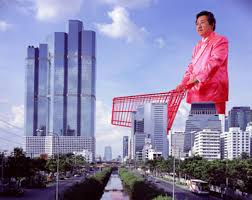 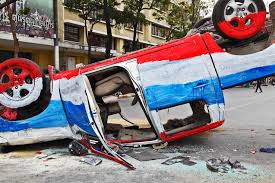 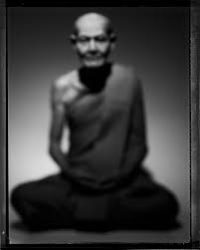 Manit Sriwanichpoom is the most prominent and internationally active photographic artist of his generation in Thailand, known for his relentless socio-political critiques that combine formal elegance with ironic humor. His first solo exhibition in the United States, Shocking Pink Story, took place at Tyler Rollins Fine Art in 2018.

Born in 1961 in Bangkok, Thailand, where he continues to live and work, Manit received his BA in Visual Art from Bangkok’s Srinakharinvirot University in 1984. His commitment to social activism developed while still a student, and during the 1980s he established himself as a photo-journalist, working for an international news service to document Thailand’s volatile political scene and rapidly developing consumer culture. Always with an artist’s sensitivity to the interplay between the sensuousness of surface aesthetics and the emotional and ideological contents they embody, he sought to develop a deeper critique that could convey what he calls “emotional truth” while giving free rein to his urge toward visual exuberance. These various currents coalesced in the mid-1990s with Pink Man, his ongoing photographic series in which a portly man, embodied by Thai poet Sompong Thawee, dressed in a hot pink suit and pushing a similarly colored shopping cart, inserts himself into various aspects of Thai life, mutely lampooning consumer culture. The catastrophic financial crisis that hit Thailand in 1998 brought greater urgency, and a more pointed critique, to the series, which has continued to the present day, chronicling an increasingly jarring sequence of social tensions, political unrest, and coups d’état. “I found that the character took on a life of its own – one of the reasons being the audience response to it,” Manit explains. “And, as an art piece, it can continue because it is still making social commentary. It’s like a cartoon character, like Batman or something. When some trouble crops up, he comes to the rescue. In the case of Pink Man, he has become a reflection of current events in our society. I see the character as reflecting an entire era.”

Manit came onto the international art scene twenty years ago, with his participation in the 1998 Bienal International de Sao Paulo, and he has shown regularly around the world ever since. In 2003, his work was featured in Thailand’s first pavilion at the Venice Biennale, and a mid-career survey, Phenomena & Prophecies, was presented at the Singapore Art Museum in 2010. The scope of his work extends far beyond Pink Man, and he has produced diverse bodies of work ranging from intimate portraits of his neighbors, to eerie images of the effigies of revered Buddhist monks, to scenes of urban riots and street demonstrations – all conveyed with what has been called a unique “combination of technical virtuosity, ambivalence, and depth of feeling with a strange, childlike directness.” He has a deep interest in the history of photography and its role in Thai culture, and, along with his wife, filmmaker Ing K, he established Kathmandu Gallery, Bangkok’s leading photography gallery and bookshop, which presents rotating exhibitions of contemporary and historic photography.

The Invisible Photographer Asia: Manit Sriwanichpoom on Art, Purpose and Being Fearless

The Culture Trip, Manit Sriwanichpoom: Blurring Photography and Film with Activism in Thailand

Thai Caption, Why the Pink Man in the Header?

Asian Art Newspaper, Politics of the Pink Man in the Post-Thaksin Era

Phnom Penh Post, Thai Artist Seeks Discomfort as the Medium for His Message

Australian Financial Review, Thailand Focus: The Blood Behind the Smiles

Bangkok Post, Manit Sriwanichpoom: The Man and His Camera

The Daily Yomiuri, Pink, Shocking as Ever