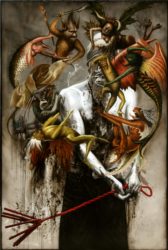 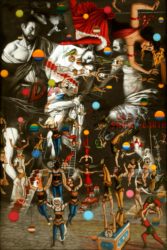 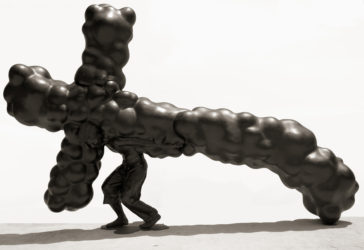 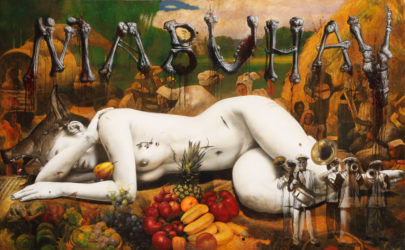 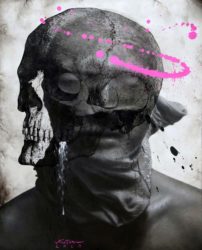 Born in 1973 in Manila, the Philippines, where he continues to live and work, Ronald Ventura ranks as one of the most acclaimed artists of his generation in Southeast Asia. With their unique combinations of figurative motifs, his paintings and sculptures are now among the most recognizable images of contemporary art in Southeast Asia. His work features a complex layering of images and styles, ranging from hyperrealism to cartoons and graffiti. Ventura takes the layering process in his work as a metaphor for the multifaceted national identity of the Philippines. Over the centuries, the profound influences of various occupying powers – Spain, Japan, and the United States – along with the underlying indigenous culture, have produced a complex and at times uneasy sense of identity. Ventura explores this historical and psychic phenomenon through a dialogue of images evoking East and West, high and low, old and young – seen, for example, in allusions to Old Master paintings or Japanese and American cartoons. He draws our attention to the “second skin” of cultural signifiers that each person carries with him, however unwittingly. Ventura views skin as an expressive surface – written on with tattoos, concealed under layers of imagery, or exploding outwards to reveal an inner world of fantasy and conflict.

Ventura presented his first US solo exhibition, Metaphysics of Skin, at Tyler Rollins Fine Art in 2009, following up with A Thousand Islands in 2011, E.R. (Endless Resurrection) in 2014 and Wild State of Mind in 2017.  A major solo exhibition of his work, Project: Finding Home, took place at the Museum of Contemporary Art, Taipei in 2016. Other exhibitions of note include: Shadow Forest: Encounters and Explorations, Metropolitan Museum, Manila, the Philippines; Ronald Ventura: Big and Small, Ayala Museum, Makati City, the Philippines (2015); Bulul, Ronald Ventura and the traditional art of the Philippines, Museo delle Culture, Lugano, Switzerland (2014); Watching the Watchmen, Vargas Museum, Manila, the Philippines (2012); Recyclables, Singapore Tyler Print Institute, Singapore (2012); Surreal Versus Surrealism in Contemporary Art, Institut Valencià d’Art Modern, Valencia, Spain (2011); A Duad in Play, ICA Gallery, Lasalle College of the Arts, Singapore (2010); Mapping the Corporeal, National University of Singapore Museum (2008). He was also a participating artist in the Prague Biennale (2009) and the Nanjing Biennial (2010).

Artinfo, The 7 Top Shows to See This Week, From Lisa Yuskavage to Carsten Nicolai

+Koultura, The Strong and The Beautiful

Contemporary Art Philippines, The World According to Ronald Ventura