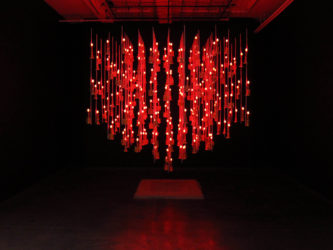 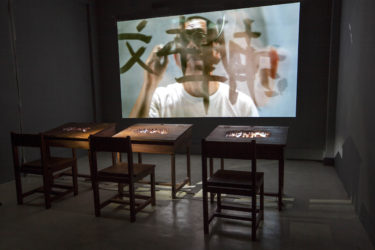 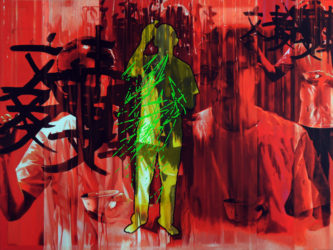 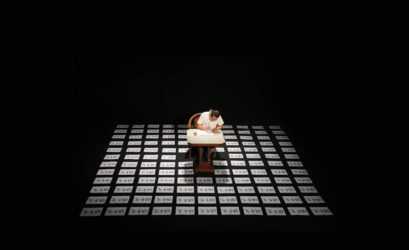 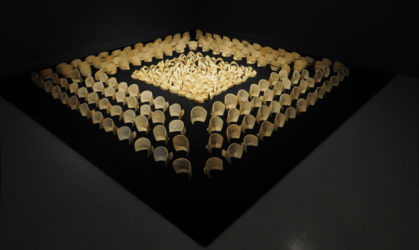 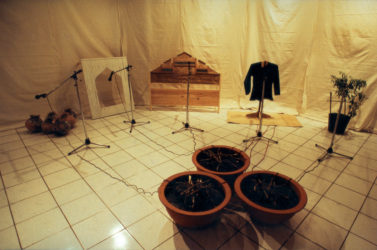 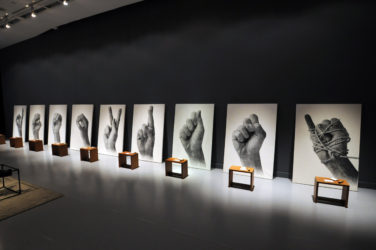 FX Harsono, one of Indonesia’s most revered contemporary artists, has been a central figure of the Indonesian art scene for over 40 years. In 1975, he was among a group of young artists who founded Indonesia’s Gerakan Seni Rupa Baru (New Art Movement), which emphasized an experimental, conceptual approach, the use of everyday materials, and engagement with social and political issues. Over the course of recent decades that have seen enormous transformations in Indonesia, Harsono has continuously explored the role of the artist in society, in particular his relationship to history. During Indonesia’s dictatorial Suharto regime (1967-98), his installation and performance works were powerfully eloquent acts of protest against an oppressive state apparatus. The fall of the regime in 1998, which triggered rioting and widespread violence, mainly against Indonesia’s ethnic Chinese minority, prompted an introspective turn in Harsono’s artistic practice. He embarked on an ongoing investigation of his own family history and the position of minorities in society, especially his own Chinese-Indonesian community. The recovery of buried or repressed histories, cultures, and identities – and the part that the artist can play in this process – have remained a significant preoccupation. Through looking into his own past, Harsono has touched on concerns that resonate globally, foregrounding fundamental issues that are central to the formation of group and personal identities in our rapidly changing world.

His 2016 solo exhibition at Tyler Rollins Fine Art, The Chronicles of Resilience marked an important new stage in this process. Curated by Leeza Ahmady, independent curator and director of New York’s Asia Contemporary Art Week, the exhibition centered on two new installation works especially conceived for the show, along with video, drawings, and multi-media works. Initially inspired by a cache of documentary photographs taken by his father in the 1950s, Harsono has, since 2009, been actively tracking down little known mass gravesites of ethnic Chinese massacred in his native Java from 1947-49, during the period of conflict leading to Indonesia’s independence in 1949. After years of investigation, and the discovery of many neglected sites, Harsono has created a series of artworks that seek to give form to what has been buried along with the bodies: not only the stories of individual lives, but the historical memory of a nation. The two installations, Memory of the Survivor and The Light of Spirit (both 2016), function as monuments of remembrance, commemorating the specificity of personal tragedies alongside the collective loss, and bringing light to a past that had long been consigned to the darkness. Other works in a variety of media reflect the artist’s own attempts to come to terms with the reality of the sites as physical testaments to history, incorporating documentary materials such as government reports, Google maps and the artist’s own handmade rubbings of inscriptions. “The works embody Harsono’s socio-philosophical lens, which views the life of an individual as intrinsically linked to collective history,” Ahmady explains. “They are a making and recording of history, simultaneously. An encapsulation of a particular people’s experience in a particular place and time, told in ways that create transparent, personal, and emotional spaces for viewers to stand very much apart from negative identity-politics, and instead very close to universal humanity.”

In recognition of his decades long “commitment to art and to freedom of expression in art,” Harsono was awarded the Joseph Balestier Award for the Freedom of Art in 2015, presented by the US embassy in Singapore, and in 2014 he was given the Prince Klaus Award honoring his “crucial role in Indonesia’s contemporary art scene for forty years.” His work has been shown in over 100 exhibitions around the world, including the seminal Traditions/Tensions: Contemporary Art in Asia at Asia Society in New York (1996), and the first Asia-Pacific Triennial of Contemporary Art in Brisbane, Australia (1993). The Singapore Art Museum mounted a major career retrospective, FX Harsono: Testimonies, in 2010. He presented his first solo exhibition in the United States, Writing in the Rain, at Tyler Rollins Fine Art in 2012. Most recently, he presented a solo exhibition, NAMA, at Tyler Rollins Fine Art in 2019. Recent biennials include Indonesia’s Jogja Biennale (2013) and the Sydney Biennale (2016).

Please click on the links below to view videos of Harsono and his work.

INTERVIEW
An interview with the artist by curator Christine Clark

FX Harsono: The Chronicles of Resilience
(2016)

FX Harsono: The Chronicles of Resilience

FX Harsono: Writing in the Rain

COBO Social, Review: FX Harsono and the Complexity of NAMA

Hyperallergic, Learning About Tactics of Resistance Through Southeast Asian Art

The New York Times, Southeast Asia Stakes Its Claim in the Art World

COBO Social, After Darkness: Southeast Asian Art in the Wake of History

The Jakarta Globe, FX Harsono, Reaping the Fruits of Pain

Art Asia Pacific, This is History

National Portrait Gallery Beyond the Self: Contemporary Portraiture from Asia

Beyond the Dutch, Indonesia, the Netherlands and the Visual Arts, from 1900 until now