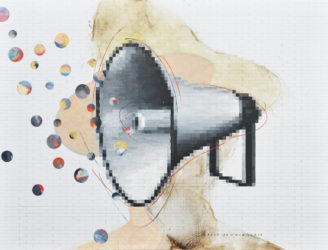 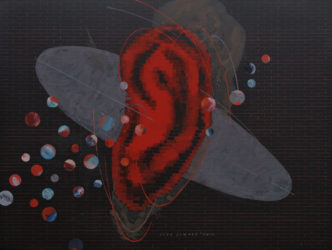 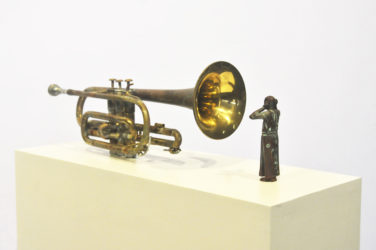 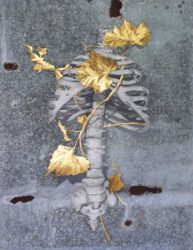 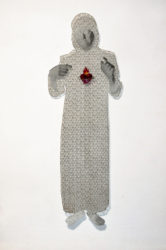 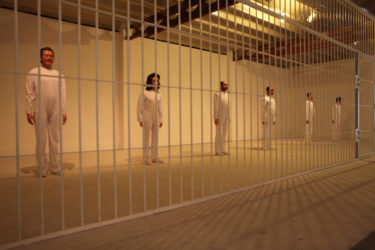 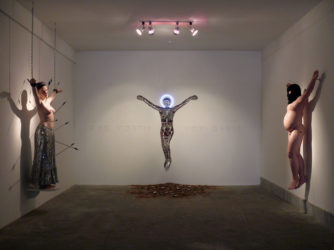 One of Indonesia’s most revered and internationally active contemporary artists, Agus Suwage is known for his paintings, drawings, sculptures, and installations that relentlessly investigate the interrelationships between multiple forms of identity – touching on issues of ethnicity, religion, and politics – as viewed through a very personal lens. Over the course of his 35-year career, he has continually returned to the self portrait as a primary motif through which not only to address these broader socio-political issues but also to probe what it means to be an artist. He has had a longstanding fascination with the process of artistic inspiration, with notions of artistic influence, and with the role of the artist in society. Appropriation, particularly from his own work – but also from the works of his peers, of iconic works of the past, and of the contemporary mass media – is a central, ongoing strategy for Suwage, a process of recycling and recontextualizing that parallels the cycle of life and death that has been an underlying theme throughout his career, and which is grounded in the spiritual traditions of Java’s ancient Hindu-Buddhist culture. Suwage’s mixed Chinese Javanese heritage, and his experience as a Christian convert to Islam, have informed his approach to cultural pluralism and religious syncretism. His works have often made critiques – sometimes pointed, sometimes veiled – of various forms of intolerance and of the attempt to impose a single rigid, monolithic structure on society, whether by Indonesia’s authoritarian Suharto regime (1966-98) or more recently by the rise of a fundamentalist strain of Islam in Indonesia. The specter of violence recurs in many of his works, creating a somber mood that is leavened by humor and an irreverent spirit of self-mockery and irony. Suwage is a master of paint and watercolor, and his works shimmer with vibrant color delineated by boldly assured line drawing, the use of textual components, and startling juxtapositions of images – all hallmarks of his early training in graphic design.

Born in 1959 in Central Java, Indonesia, Suwage received his M.F.A. in graphic design from the Faculty of Art and Design at Bandung Institute of Technology in 1986. He has since been featured in almost 200 exhibitions around the world, and his works are included in most comprehensive collections of Southeast Asian contemporary art. He has exhibited in numerous international biennials, including the Asia Pacific Triennial (1996), the Gwangju Biennial (2000), the Singapore Biennial (2006), the Jogja Biennale (2007 and 2013), and Prospect New Orleans (2014-15). In 2009, the Jogja National Museum in Yogyakarta, Indonesia, devoted all three floors of its building to a major retrospective of Suwage’s work, including paintings, drawings, sculptures, and installations. A 670-page monograph, Still Crazy After All These Years, was published in conjunction with this landmark exhibition. Recent museum exhibitions include: Manifesto V: Arus, National Gallery of Indonesia, Jakarta (2016); After Utopia: Revisiting the Ideal in Asian Contemporary Art, Singapore Art Museum (2015); Panorama: Recent Art from Contemporary Asia, Singapore Art Museum, Singapore (2012); Beyond the East, Macro Museum, Rome, Italy (2011); Beyond the Self, National Portrait Gallery, Canberra, Australia (2011). He presented his first solo exhibition in the United States, The End is Just Beginning Is the End, at Tyler Rollins Fine Art in 2011. This was followed in 2012-13 by a three-part series of CYCLE exhibitions shown consecutively in Jakarta, New York, and Berlin. CYCLE No. 2 was presented at Tyler Rollins Fine Art in 2013. In his New York Times review of the exhibition, Holland Cotter wrote: “Topical commentary has always been the foundation of this remarkable artist’s work. He’s a born satirist, which means a born moralist. The range of his subjects, cultural and existential, is broad; his take, vivid and sharp.”

His third solo exhibition at Tyler Rollins Fine Art was presented in 2017. The exhibition’s title, Room of Mine, suggests that the new works have a highly personal focus, offering a glimpse into the artist’s own studio, and by extension into his own inner world. With a series of large-scale watercolors and an extraordinary group of paper mâché sculptural works, he reveals aspects of his studio space – his work table, library, and bedroom – as well as a wide array of images that continue to haunt him, whether taken from the works of renowned Indonesian painters of the past, from contemporary mass media, or from his own earlier work. Appropriation, particularly of his own work, is a central, ongoing strategy for Suwage, a process of recycling and recontextualizing that parallels the cycle of life and death that has been an underlying theme throughout his career, and which is grounded in the spiritual traditions of Java’s ancient Hindu-Buddhist culture.

Agus Swage: Room of Mine

Agus Suwage: The End is Just Beginning is the End

Agus Suwage: Still Crazy After All These Years

Hyperallergic, An Indonesian Artist Paints Fundamentalists as Buffoons and Monkeys

The Jakarta Post, Agus Suwage Goes Back to the Basics

Beyond the Self at the Canberra National Portrait Gallery

Art + Auction, From the Editor

The Wall Street Journal, A Chance for Lesser Asian Stars to Shine

The Wall Street Journal, The Year of the Artist